Over the summer a lot of high school students came in to the bookstore looking for March: Book One and it was on our Summer reading List; and it got me thinking. . . 🤔

I had a hard time trying to figure out the best way to write a review for this book/graphic novel. So, I didn’t. Instead I chose to choose some panels and tell you a few familial personal stories. I hope you enjoy. But above all else, I hope you either go buy March or check it out from your local library. John Lewis’s story is AH-mazing!

I heard about it prior to this summer, but because it’s not my typical genre – nonfiction – I never bothered. Well, I’m glad I did. I really enjoyed this.

March is a vivid first-hand account of John Lewis’ lifelong struggle for civil and human rights, meditating in the modern age on the distance traveled since the days of Jim Crow and segregation. Rooted in Lewis’ personal story, it also reflects on the highs and lows of the broader civil rights movement.

Book One spans John Lewis’ youth in rural Alabama, his life-changing meeting with Martin Luther King, Jr., the birth of the Nashville Student Movement, and their battle to tear down segregation through nonviolent lunch counter sit-ins, building to a stunning climax on the steps of City Hall.

Amidst all the seriousness I did have a few laugh out loud moments. Like this one. 👇

When I saw this panel, I had a laugh out loud moment but I also had a shake my head in disgust moment. Just the sheer ignorance of people to be fearful of someone because of the color of their skin or because they look different than you is ridiculous.

My father is originally from South Carolina and I remember him relaying stories about driving and how black people would get pulled over for no reason at all and harassed and accused of stealing the car they were driving. He told me stories of having to travel at night because it was ‘safer’ and sticking to certain roads because, again, it was ‘safer’. 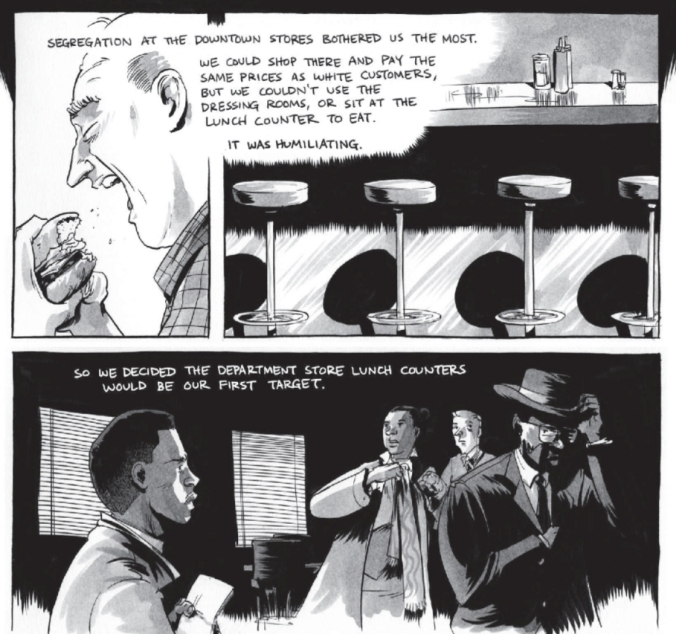 I’ve never had the pleasure of eating at a department store lunch counter, but I’ve been told it was an experience. Anyway, not sure how this came up; but it came up in conversation recently with my mom and dad, and it really sticks in his craw.

He was in the Army and came home (South Carolina) from deployment and was in uniform. He stopped by one of the department store lunch counters and was told that he couldn’t eat there. What the What?! Here this black man is fighting for your freedoms and he can’t sit and eat at the lunch counter. 😡🤬😡🤬

You know a lot of things are done in the name of Christendom – good and bad. Isn’t it odd they were willing to pray with black people, but didn’t want to sit next to them at the lunch counter and break bread. Hmm. I’m going to go with that’s not very Christian-like. 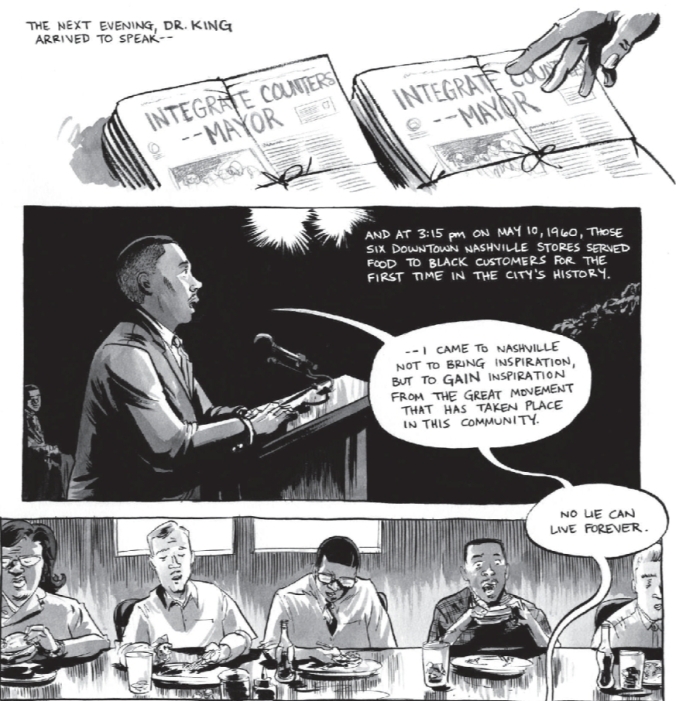 No lie can live forever.

How very true. It’s amazing how people hold on to lies in order to  make themselves better about something they’ve done wrong.

In the end, all lies always come crashing down and it typically leaves a trail of carnage.

4 thoughts on “Review: March Book One by Senator John Lewis”