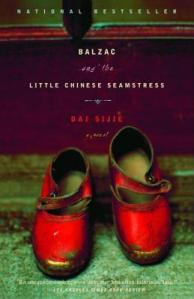 Balzac and the Little Chinese Seamstress by Dai Sijie has been on my TBR list for about a year and I was fortunate to find a copy at my local library’s used book sale.

Was it boring? No. But I couldn’t and still can’t put my finger on why it didn’t keep my attention.

But I couldn’t and still can’t put my finger on why it didn’t keep my attention.

I thought maybe it was because the book has something to do with re-education, but I found that topic somewhat interesting. I remember studying it in school and wondering why leaders felt intimidated by educated people and having an individual thought.

I found it interesting that Suijie would call this re-education mountain Phoenix of the Sky. If you know mythology, you know that it is a bird cyclically reborn or regenerated. And birds, in general, can symbolize the transcendence from man’s earthly material needs/wants to man’s spiritual needs.

So, two teenage boys (the unnamed narrator and Luo) are sent to Phoenix of the Sky for re-education our unnamed narrator takes his violin; which no one on the mountain has ever seen or heard and the headman deems it

and instructs that it be burned. However, Luo saves the violin from its fiery fate by telling the narrator to play a piece; which he does – a Mozart sonata (which has been banned) and it soothes the villagers and the narrator is allowed to keep it.

The two teenagers are considered lifers unless their parents can buy their freedom and knowing this the childhood friends make the most of it by playing with the headman. Luo brought an alarm clock in which the headman becomes enamored with, so instead of continuing to start the day when the rooster crows he [the headman] starts the day when the alarm clock goes off. And, in knowing this the narrator and Luo when they want to sleep in adjust the clock back or to end the day early set the clock ahead. Quite clever, huh?

The boys often visit other villages on Phoenix of the Sky. They became friends with another youth going through re-education they called Four-Eyes because well, of course he wore glasses. They suspected he had forbidden Western books hidden in a suitcase which of course they wanted to read. They volunteered to do Four-Eyes a favor if he would lend them a book. The book Four-Eyes lent them was Ursule Mirouët by Honoré de Balzac; which the two devoured.

They also visited the village of the Little Seamstress who Luo fell smitten with. He regretted having returned the novel to Four-Eyes as Luo felt he

could have read it out, page by page, to the Little Seamstress. That would have made her more refined, more cultured.

The villagers kept learning from these city youths and kept integrating various parts of city life into their uncultured mountain ways. For instance, the narrator and Luo were excellent story tellers, so the headman would send them to the nearest city to watch a movie. They were instructed to return and retell the movie word for word. They did. And the villagers listened attentively and wanted more. Unbeknownst to the villagers, they were being re-educated to the ways of the city.

While I was making a push to the end of Balzac and the Little Chinese Seamstress, I fixed myself a hot chocolate, but not any ole hot chocolate – a Spicy Coffee-Spiked Hot Chocolate.

I’ve include the recipe for the Coconut Sweetened Condensed milk if you’d like to try your hand at making your own. It’s sooo yummy!

1. In a saucepan bring coconut milk, cocoa powder, sugar, and cayenne pepper to a gentle simmer. Stirring often to keep the mixture from sticking.

2. Once ingredients are combined and mixture is warm pour into coffee and add coconut condensed milk
[/recipe-directis]

*You can certainly use regular sweetened condensed milk. I try to stay away from animal milk.