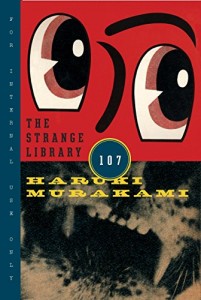 I was supposed to read this as part of a novella challenge I was going to do, but life happened and the challenge didn’t get done. This past weekend I decided to take it with me on my trip to Vegas and read it on the plane. It only took about an hour – the plane ride and the book.

A teenage boy takes his mother’s advice (whaaaaat?) about going to the library to look something up he knows nothing about and finds himself being held captive by an old man and a ‘sheep man’ in the Reading Room.

Haruki Murakami’s The Strange Library was indeed a strange read. It’s about a teenage boy who goes to the library to return some books and check out books about tax collection during the Ottoman Empire. The novella involves a strange cast of characters – a teenage boy, an old man, a mute girl and a man dressed in a sheep costume.

The novella is set up quite differently than any other book I’ve read. It starts on the ‘cover’ and the typeface is Typewriter; which made for a quick and easy read. On the front of the book it says, ‘For Internal Use Only’; which made me wonder “what’s this about”.

The action moves quickly and before your brain has as opportunity to process the previous WTF Murakami hits us with another. The action slows down but not for long when the unnamed teenage boy encounters, 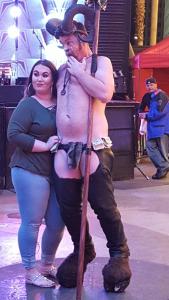 A small man clad in the skin of a sheep.

It was real sheepskin, and it covered every inch of the sheep man’s body. There was an opening for the face. . .

When I read this I had an image of a Centaur or Faun in my head. Perhaps it was because my boyfriend and I had gone on Vegas’ Fremont Street the night before and saw this ☞ ☞ ☞

Now that that image has been burned into your cornea, let’s move on.

There is a girl who the boy describes as:

. . . so pretty that looking at her made my eyes hurt.

The girl, however, is a shapeshifter. She turned herself into a starling which grew to the size of a bull.

As I was reading I kept wondering if the boy was dreaming. And after finishing, I still don’t know and I like it that way, which is unusual for me.

One thought on “[Book Review] The Strange Library by Haruki Murakami”