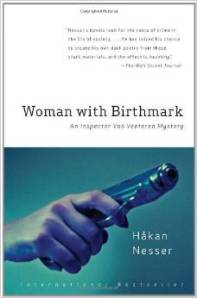 I read the previous Van Veeteren mysteries and I have to say this is my least favorite. Woman with Birthmark is for all intents and purposes a police procedural. It follows the detectives knocking on doors, doing interviews, fielding phone calls, and not getting anywhere — at all. It was frustrating to me as a reader, but perhaps the most frustrating part is that the killer is revealed at the very beginning; which left me nothing really to try and figure out. What’s not revealed is the why and if you’re an astute reader you’ll figure out the why after the first murder, if not than you’re sure to get after the second.

Sadly, the characters are not memorable including the ones that have already appeared in previous Van Veeteren novels. I found myself asking from time-to-time who is this one and what’s his/her significance. I didn’t see the classic crotchety Van Veeteren, I had grown fond of. Perhaps he’s mellowing since his illness or simply he’s “an old sod, an old, tired detective who’s seen too much and doesn’t want to see much more” (WB 281).

Sometimes I felt as though the detectives weren’t very smart, which would account for what I felt to be their lack of let’s get this murder solved. However I had to remember that the killer was quite clever and didn’t leave them anything to nibble on. I was hoping that her last victim would have turned the tables on her, but alas no such luck. And to be honest, that was the twist I came up with in my head to keep reading the novel.

I was surprised by the twist at the end and I had hoped that it would turn out differently, but at the same time I could have cared less. I was just on page count down mode. I wasn’t vested in any of the characters and didn’t like them either.

No, I take that back. I liked Winnifred Lynch, Reinhart’s girlfriend. She’s the only one that determined the murderer was a woman. Not even that silly female detective Ewa Moreno got that.

I skimmed quite a lot of the novel, but there were parts I had to read. If you skim over the extraneous stuff (and there’s a lot of it) you could probably have Woman with Birthmark finished in a couple of hours.

Woman with Birthmark is the fourth in a series of 14 Van Veetern novels. I’m not sure I’ll finish the series, but we’ll see what the Inspector and Silence has to offer.