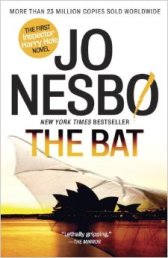 I was absolutely ecstatic when I found out earlier this year that Jo Nesbo’s The Bat would finally be available in the U.S.  It saved me from ordering it from the U.K. or Canada or even Australia.  But I was even more ecstatic when I received a galley copy of the book from the publisher (Knopf Doubleday Publishing Group) before its actual U.S. release date.

The Bat is the first book in the Inspector Harry Hole series and the latest to be released in the U.S.  Inspector Harry Hole from the Oslo Crime Squad is sent to Syndey, Australia to assist in the murder investigation of a young Norwegian woman, who is minor television celebrity in his homeland.  However Harry soon finds out that he is to be a mere observer and to look at his time in Australia as a vacation.  However as the investigation progresses Harry finds himself more and more involved in solving the murder or as he discovers murders.

It took some time to get into The Bat as there wasn’t much mind blowing action going on.  I started to get into the novel around chapter 20, then it started t wane again.  The novel gives a tremendous amount of background on Harry.  His youth.  His problem with drink.  Previous relationships.  Family, etc.  It’s also heavy on cultural anthropology — the legends and myths of the Aborigines.  It was great information and a lot of it.  Unfortunately all of this background did not really help to move the plot forward.  If anything it slowed it down.

The title The Bat is taken from an aboriginal belief that

the bat is the Aboriginal symbol of death. (TB 50)

which is quite apropos since the police are not only investigating one murder as originally thought but several murders across Australia.

Suspects are plentiful as well as racial tension between the aborigines and whites and some there is some homosexuality.  There’s sex, drugs, drink, a bar fight and other stuff; which all make for a great murder mystery, but for some reason it never really all comes together to make that great murder mystery.

This was my first introduction to reading Nesbo and I can tell that he is a strong writer and I look forward to reading the other Inspector Harry Hole novels.  If you’re a serial purist like I am and have to start with the first book, then I definitely say start with this as it gives great Harry Hole background.  If you’re not than you might want to skip it.

And for all you serial purists it looks like The Cockroaches, the second Inspector Harry Hole  novel will be out later this year.